As artists that work with digital media, we must constantly navigate the space between hardware, software, and our concept or artistic intent. And as we make our work we must also develop strategies for how that work gets displayed in whatever venue we have available. For example, perhaps we make a video artwork. Immediate decisions for distribution and viewing of that work have to be made – do we upload and let people stream from vimeo or youtube? if we do that, do we let there be commercials or rental payment to generate revenue from views? If we keep the work offline, where do we show it and how? Film festivals and video screenings are popular, but then how do transfer or file and how much compression or how large of a file should we send? The questions start snowballing… and there aren’t really any easy answers because it sometimes there are just too many variables.

Installing video work in a gallery is another one of those challenges with a lot of variables. In some cases its a good idea to supply as much of your own equipment as you can. With each successive generation of video monitors and/or media players or devices there are additional limitations on what can be played back and how its controlled. But artists are good at finding workarounds, stretching a budget, and at figuring out how to make it work. Gallery directors and assistants on the other hand, might not find it all that easy to following our process or directions. It all starts to seem like an almost overwhelming cascade of potential problems. 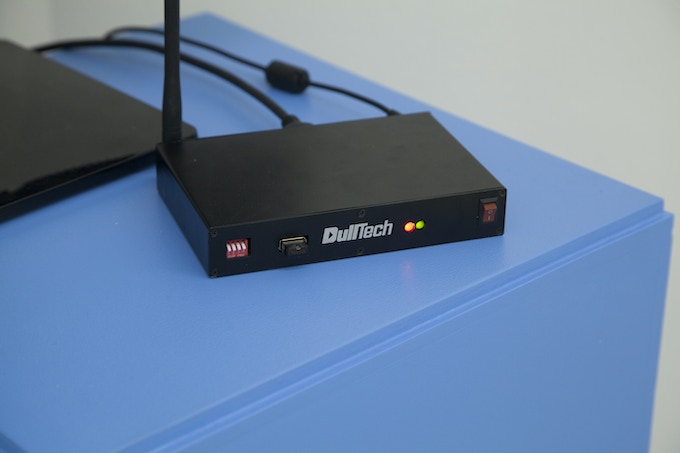 Over the last several weeks (or months) I’ve been following an artist project that seeks to address some of these questions. DullTech™ is a campaign initiated by Dutch conceptual artist Constant Dullart. To me the project is fascinating – its part artwork, part startup, part prodcut, and part commentary on contemporary techno culture. If you have some time, you should check it out – but I’ll paraphrase: its a media player that doesn’t have any menus and can connect wirelessly and sync to other media players and loop whatever file is on your thumb drive. That’s it. Nothing more, nothing less (unless I missed something). That’s a breathe of fresh air if you ask me. An artist working on a solution for a problem we all encounter by making a product that is also a bit of an artwork itself. I asked Dullart a few questions and here’s what he had to say!

RE: artist problems with video installations:

“Blood sweat and tears, days of rendering, getting special computers, and programming. It was mainly the stress and the time consumption that we did not understand, and thought was too complex. But we always got it done. These installs just needed to get more dull. So there would be more time making the content exciting! So we just designed a device without playlists, menu’s and difficult settings. One that would just play and sync video, and do that well. Just switch it on and you’re done. Weirdly enough it wasn’t that hard. Most machines just have too many options… “

RE: building tech products in China and becoming a ‘startup’

“The atmosphere in Shenzhen was that western people randomly wanting to go to factories would take up time, or would be journalists writing about the conditions in the factories. The “Mr Daisey and the Apple factory” episode on This American Life, and the attention that got for example, even after the necessary retraction made it hard to “just be a visitor”. Learning how this business actually works from the inside was much more interesting. Like the artist Li Liao did when he worked in the Foxconn factory until he could afford the product he was working on. After 45 days he could afford the iPad mini. After meeting him we were inspired to play out our part in the neo colonial creative industry process.”

RE: is it artwork, commercial product, critique?

“DullTech™ is a hardware startup and performative artwork concurrently. Created as a form of radical corporate publishing in an age of high efficiency capitalism, it creates technologically simplified or ‘dull’ products in order to distribute artworks in tribute to the late Ray Johnson. Initiated during a 2012 OCAT residency in Shenzhen China, with the company’s motto ‘neoliberal startup lulz’, most products relate to production processes in the artist’s studio. The company has exhibited in the Stedelijk Museum Bureau Amsterdam, HMKV Dortmund, Transmediale Berlin and the White Building in London.”

“Of course we would pick the most dull one, that works the best, h264 in an mp4.Which coincidentally also works really well on our player, up to 60Mbps!”

You can check out DullTech™ on their kickstarter, there is still plenty of time to get in on the ground floor. There are a lot of artists projects out there in crowdfunding platforms but I can’t help but share this one because its such a great fit with my experience as an artist. Good luck DullTech™ !